Often there is a requirement to precisely identify ischemic tissue sites. To accomplish this task method known as Transcutaneous Oxygen Measurements (TCPO2) is used.

This non-invasive and precise diagnostic method is especially common before administering hyperbaric oxygen for diabetic wound healing or other wound treatment procedures. The procedure also helps to assess microcirculation of blood in capillaries…

The term transcutaneous means “through the skin”. The TCPO2 procedure works by comparing multiple measurements of oxygen tension present in tissues in healthy and ischemic sites while breathing first a regular room air and then 100% pure oxygen through an oxygen mask.

If symptoms of flu or a cold are present, the medical office personnel providing the HBOT treatment should be informed. Symptoms like nausea, vomiting, diarrhoea, fever, cold, etc… often may be a good reason to postpone the hyperbaric treatment.

Patient should inform a doctor about any drugs being taken because some medications are not compatible with hyperbaric oxygen therapy. Carbonated beverages and alcohol are rather to be avoided for 4-6 hours prior the treatment. It’s highly recommended to avoid smoking during the period of hyperbaric treatment because of its negative effect on the oxygen transport to body tissues.

Hyperbaric technician or nurse will help you to adjust medical oxygen mask or hood through which you will breathe the hyperbaric oxygen. Sometimes nasal spray is recommended to clear up nasal passages.

Often in cases of hyperbaric wound treatment a photo images of wounds are taken to monitor the progress of the wound healing.

What to Wear In Hyperbaric Chamber…

Everyday attire is most appropriate, or what you would wear on a short aircraft flight of 60 to 90 minutes.

What Is Prohibited In Hyperbaric Chamber…

Petroleum/alcohol-based products, oil-based cosmetic, pacemaker, implanted pumps, and earplugs should not be used in the chamber.

If treated in monoplace hyperbaric chamber – patient usually does not wear mask, hood or head tent for oxygen delivery rather breathing 100% pure oxygen used to pressurize the chamber. The pressure achieved in monoplace chambers is limited 3 ATA. 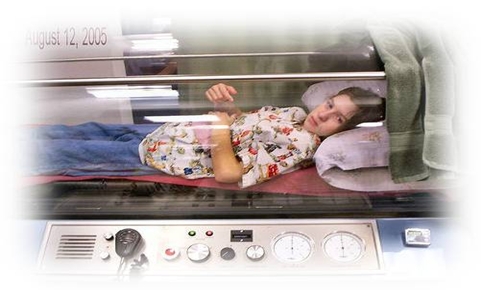 Monoplace chamber’s pressure compartment is typically a cylindrical metal or acrylic crystal clear tube allowing a person to observe her surroundings and facilitated with increased comfort and mobility features.

When Hyperbaric Oxygen treatment is conducted in multiplace hyperbaric chambers, the medical oxygen is provided to patients via face oxygen masks or head hood assembly and air is used to pressurize the chamber.

Multiplace hyperbaric chambers are designed to treat more than one person at a time facilitating treatments under higher internal pressure – up to 6 ATA, which extends the scope of treated conditions. The design patterns, capacity, size, pressure compartments structure and accessories are varying, often because many big multiplace chambers are built to accommodate the hosting hospital’s specific requirements. 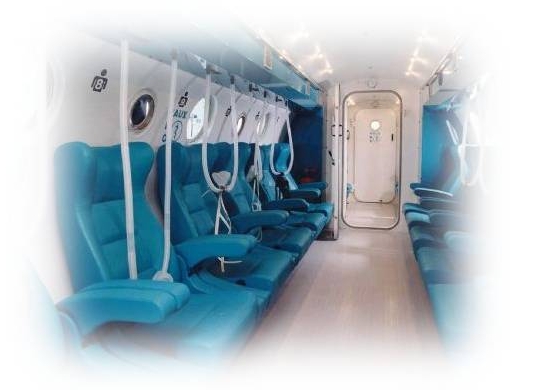 In modern multiplace hyperbaric chambers emergency and intensive care operations may be performed utilizing invaluable healing properties of hyperbaric oxygen. Due to chamber’s dual rectangular double doors and entry locks – doctors or patients can enter and exit chambers without interrupting the treatment.

Patients on wheel chairs or gurneys can easily being entered inside because chamber’s compartments are matched to the floor level.

During the 60-90 minutes of hyperbaric treatment, patients may relax listening to music, watching TV, DVD, reading or just sleeping…

As air starts coming into a chamber accompanying by gentle “tss” sound, the internal pressure slowly develops and the patient might feel a slight warming. Similar to the descent of an airplane, patients can develop a fullness or pressure feeling in their ears.

Special techniques are to be learned to reduce uncomfortable effects…like eating sweats and drinking water. When pressure goes down by the end of the Hyperbaric Oxygen treatment patients might feel chilly. The temperature changes are well explained by physics…. Charles’s law.